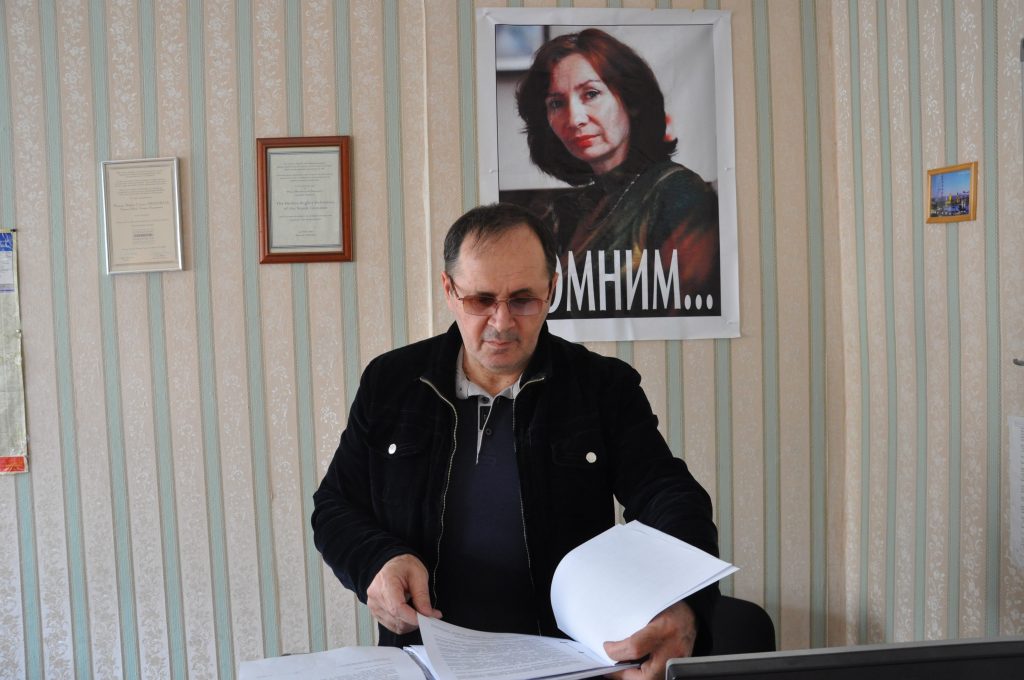 Oyub Titiev in Memorial’s local office in Grozny, Chechnya. In the photo, Oyub is standing in front of a portrait of his murdered colleague, Natalia Estemirova.

In less than a month, millions of people will turn their eyes upon Russia as the 2018 Football World Cup kicks off. Ahead of the tournament, Civil Rights Defenders and 13 other international and Russian human rights groups sent an open letter to FIFA, urging the association to start engaging with the Russian authorities on the human rights crisis in Chechnya. On 18 May, FIFA sent its reply.

In January 2018, Chechen authorities started a campaign against the leading Russian human rights organisation Memorial, by jailing prominent human rights defender and head of Memorial’s local office, Oyub Titiev, on fabricated charges. In February, it was announced that the capital of Chechnya, Grozny, was confirmed by FIFA as the team base for Egypt.

In our open letter to the association, we called on FIFA to “engage with the Russian authorities on the human rights crisis in Chechnya, in particular on the attack against Titiev and Memorial”.

“Such engagement is consistent with FIFA’s responsibility to respect human rights under the UN Guiding Principles on Business and Human Rights,” the letter addressed to Mr. Infantino, President of FIFA, read. “It is also consistent with the commitment in article 3 of FIFA’s statutes to promote the protection of international human rights, and would demonstrate determination to implement its new Human Rights Policy”.

FIFA has now replied to the letter, thanking the rights groups for raising concern about the detention of Oyub Titiev: “As you note in your letter, this includes a commitment to respect and strive to promote the protection of all internationally recognised human rights. In that respect, FIFA values the important work done by human rights defenders such as Mr. Titiev and yourselves and is, in accordance with paragraph 11 of its human rights policy, committed to respect and help protect the rights of everyone who is working to advance human rights in relation to FIFA’s activities.”

“We welcome that FIFA is concerned about the fate of the human rights defender Oyub Titiev and that FIFA’s leadership is personally invested in his situation. FIFA has an excellent opportunity to channel this engagement by raising Oyub Titievs case with president Vladimir Putin and move the training camp of the Egyptian team out of Chechnya. The fact that the Egyptian team will have its training camp in Chechnya gives the dictatorial leadership of the republic a recognition it has not deserved”, said Joanna Kurosz, Eurasia Programme Director at Civil Rights Defenders.