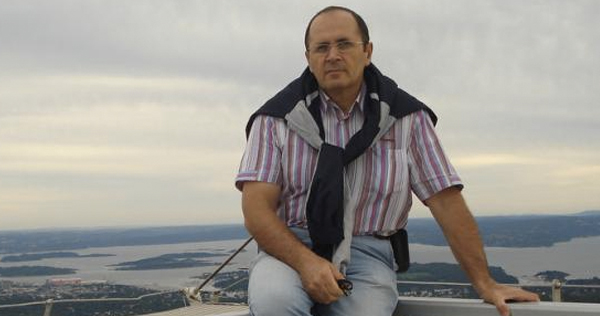 Oyub Titiev was detained by Chechen road police on his way to work on 9 January 2018. Photo: Memorial.

On his way to work on 9 January 2018, Oyub Titiev, director of Human Rights Center Memorial’s Grozny office, disappeared. Seven hours passed before officials confirmed that he has been detained at the Kurchaloy road police station. He has been charged with unlawful drug possession and, if persecuted, faces up to ten years in prison.

Oyub Titiev was detained by road police around 10.30 am on 9 January. He was later delivered to the Kurchaloy road police station in Grozny, the capital of the Russian republic of Chechnya, where he was kept incommunicado for seven hours before the officials confirmed his detention. The police claimed that they had found 180g of marijuana in his car and presented him with charges of unlawful drug possession. If prosecuted, he faces up to ten years in prison. Titiev denies the accusations.

Oyub Titiev took the lead of Human Rights Center Memorial’s Grozny office after the murder of Natalia Estemirova in 2009. Estemirova paid with her life for documenting the cases of torture, kidnappings and extrajudicial killings.

HRC Memorial has done extensive reporting about the grave human rights violations taking place in Chechnya over the years. The sustained, systematic, and grave abuses continue to be perpetrated in a climate of complete impunity. Over the past years, Chechnya’s regime leader, Ramzan Kadyrov, has intensified the persecution of anyone who expresses criticism or deviates in virtually any aspect of life. Punishment of the whole family and relatives, and public humiliation, often in front of TV cameras, is common. Last year, Novaya Gazeta and Memorial reported on dozens of extrajudicial killings of suspected insurgents and collaborators, and Novaya Gazeta exposed mass detentions, cases of torture, and killings of gay men.

Oyub Titiev’s case is strikingly similar to those of two other Chechen activists who were sentenced in retaliation of the work. Both the activist Ruslan Kutaev, and Caucasian Knot’s correspondent Zhalavdi Geriev, were imprisoned similar trumped-up drug charges. Kutaev, imprisoned in 2014, and Geriev, imprisoned two years later, were both tortured in custody.

On the evening of 20 January, a group of men who introduced themselves as police officers from Chechnya forcefully entered the apartment of retired federal judge Sayda Iangulbaev and his wife Zarema M...

The European Union Must Protect OVD-Info from Russian Persecution

On 25 December, the Russian state media regulator Roskomnadzor blocked the website of OVD-Info, an independent Russian media and human rights project and the recipient of the Civil Rights Defender of ...

In an unprecedented and appalling move, the Russian authorities forced the closure of Memorial, a leading human rights watchdog. Yesterday, the Supreme Court ruled to shut down International Memorial ...

Inside the Memorial Trials – “When you make fun of evil, it stops being scary”

In today’s unprecedented decision, the Russian Supreme Court has shut down the country’s most prominent human rights organisation – International Memorial Society. The organisation has been on trial s...

Memorial, a cornerstone of Russian civil society, is under threat of liquidation by the Russian authorities on baseless charges. Memorial’s two entities – Memorial Human Rights Centre and Intern...