On 28 March, Sirazhutdin Datsiev, the head of Human Rights Center Memorial’s Dagestan office, was violently attacked by an unknown person. Datsiev’s colleagues believe that the attack is a result of his legitimate human rights work. 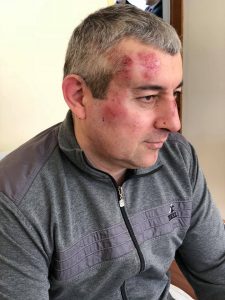 Sirazhutdin Datsiev was attacked by an unknown person in Dagestan, North Caucasus, on 28 March.

The assault took place in Makhachkala, the capital of Russia’s republic of Dagestan. It was around 9.30 when Datsiev was on his way to the office. According to a witness, Datsiev was hit in the head from behind by an unknown person who had gotten out of a car with tinted windows. Datsiev fell but managed to stay conscious and call an ambulance.

Memorial is one of Russia’s leading human rights organisations. It has documented human rights abuses in the volatile North Caucasus region for more than two decades.

Dagestan, the largest republic in the North Caucasus region, is known for mass abuses of human rights such as persecutions of followers of non-traditional Islam, illegal detentions, torture, enforced disappearances, and extrajudicial executions.

In recent years, Memorial’s office in Dagestan has been fighting the illegal practice of so-called “preventive extremist lists”, providing legal redress to the residents of the Vremenny village, whose houses were destroyed and property both damaged and stolen during a mop-up operation in 2014. Memorial is currently also seeking justice in a resonance case of two teenage brothers, Gasangusejnov, who were murdered by the law enforcement and later presented as insurgents.

In January 2018, Memorial’s offices and staff were systematically targeted over their work in the region. The attacks include the arrest of the head of Memorial’s office in the Chechen Republic, Oyub Titiev. He now risks up to ten years in prison on fabricated charges of unlawful drug possession. Furthermore, only weeks after the arrest, Memorial’s office in the republic of Ingushetia was torched, and an car was set on fire in Dagestan. In connection with the attack, the staff in Dagestan received threatening text messages and a phone call saying that they should shut down their operations.

To this day, neither of the attacks has been properly investigated.