Civil Society Groups Call for the Release of Tep Vanny 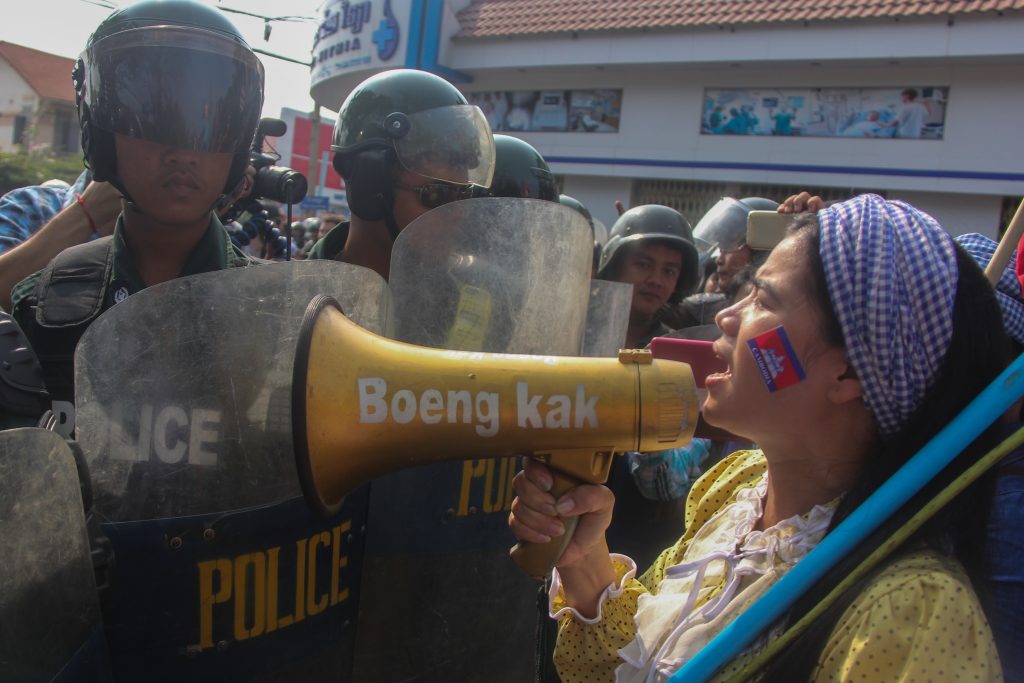 Land activist and human rights defender Tep Vanny has been unjustly detained for two years as of today, for defending the rights of the Boeung Kak Lake community and her fellow Cambodians. We, the undersigned communities and civil society organisations, condemn her ongoing imprisonment and call on the authorities to immediately and unconditionally release Tep Vanny, drop all dormant criminal charges and overturn any convictions against her, so that she may return to her family and community.

Tep Vanny has fought tirelessly to protect the rights of members of her community following their forced eviction from their homes on Boeung Kak Lake, Phnom Penh, but also those of fellow human rights defenders campaigning for separate causes. As long as she is behind bars, Tep Vanny is prevented from carrying out her peaceful and valuable work.

“We have to share all the benefits of our experience. If we stand up together, we can get justice,” said Tep Vanny. “If the communities join together, we have big power.”

It was during one such peaceful protest that Tep Vanny was arrested on 15 August 2016, challenging the arbitrary detention of four human rights defenders and one election official. On 22 August 2016, she was convicted of ‘insulting a public official’, and sentenced to six days in prison. However, instead of releasing her based on time served, the authorities reactivated dormant charges dating back to a 2013 peaceful protest, later sentencing her to two and half years of imprisonment and a fine of 14 million riels (around $3,500). To date, Tep Vanny’s requests for pardon or early release have all been rejected. Her many trials and appeals have fallen far short of fair trial standards, with the evidence presented failing to meet the burden of proof required to sustain a conviction.

“As a victim of eviction I can guarantee that Tep Vanny did not use any violence or do anything wrong. I would stake my life on that,” said fellow Boeung Kak Lake activist Bo Chhorvy. “The authorities should release her so she can be with her family. Her children and mother need her.”

Her excessively lengthy detention, apart from taking a personal toll, further deprives her two children of a normal childhood, since they only see their mother once a month. Tep Vanny’s mother’s deteriorating health is aggravated by the ongoing unjust treatment of her daughter. The inability to care for her family places an acute psychological burden on Tep Vanny which is exacerbated by her detention in one of Cambodia’s worst prisons. Civil society representatives as well as members of the Boeung Kak Lake community have been frequently turned away when attempting to visit her in prison, further compounding the isolation from friends and family and in violation of the UN Standard Minimum Rules for the Treatment of Prisoners.

We call on the Cambodian authorities to release Tep Vanny immediately and unconditionally, drop all charges and end all criminal investigations against her. This will ensure that she is able to continue her work as a human rights defender, and more importantly reunite with her family and community. Finally, we urge the authorities to cease the intimidation and harassment of Tep Vanny and all other activists through arrests, prosecution and imprisonment.

This statement is endorsed by:

Freedom of Expression in Cambodia – a Distant Dream?

Over the past few years, the Cambodian government has effectively gained control over all traditional media in the country. Many Cambodians, not least journalists and human rights defenders, have inst...

In a joint letter, Civil Rights Defenders and 27 other civil society organisations urge the UN Human Rights Council to address the ongoing human rights crisis in Cambodia. We request support for a res...

Today, on the third anniversary of the killing of prominent political commentator and human rights defender Kem Ley, the 24 undersigned organisations renew calls on the Cambodian government to establi...

Since 1994, at least 13 journalists have been murdered in Cambodia because of their work. In a joint statement, Civil Rights Defenders together with civil society groups and communities condemn the on...