First Pride Parade in Podgorica a Test of Tolerance

Civil Rights Defenders supports the first Pride Parade in Montenegro’s capital Podgorica that will be held on 20 October 2013. This is an important test to see whether the authorities in Montenegro, a society with widespread homophobia, can ensure protection for the prominent LGBT activists participating in the parade or not.

“A couple of months ago, we saw violent incidents during the Pride Parade in Budva, resulting in over 130 charges against rioters but none of them were classified as a criminal charge. We demand the police and judiciary to apprehend and process all of those who used violence to demonstrate equality before the law for everyone”, said Goran Miletic, Programme Director for Western Balkans at Civil Rights Defenders. 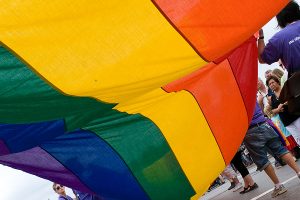 If the Pride Parade in Podgorica will be held in a peaceful and dignified manner it will not only demonstrate tolerance in society, but also the consistency of the Montenegrin authorities and their willingness to ensure international standards concerning human rights and minority rights. Montenegro is a member state of the Council of Europe since 2007 and is obliged to uphold all its standards, including guaranteeing equality and security to all of its citizens. The police, the prosecutor’s office and the courts have an obligation to ensure that the freedoms of expression, assembly and association (guaranteed by Article 10 and Article 11 of the European Convention on Human Rights, ratified by Montenegro in 2004) are respected during the Parade.

Montenegro is a society where the level of homophobia is very high, studies show that 47 per cent of the citizens have a negative attitude towards LGBT people, while almost 60 per cent consider homosexuality to be a disease.

Podgorica Pride 2013 is organised by the LGBT organisation Queer Montenegro. In 2011, a planned Pride Festival was cancelled due to lack of support by the government and threats directed to organisers and participants.

The police in the Montenegrin city of Niksic has issued a ban against a Pride March, scheduled for 18 September, at the city’s liberation day from fascism. The ban was allegedly issued due to security...

Over 25 Attacks on LGBT Social Centre Since 2013

Civil Rights Defenders condemns the latest series of attacks perpetrated against the LGBT Social Centre in Podgoricia, Montenegro, which occurred between 19-20 December. The attacks began when a group...

The second person from Montenegro to be included in Natalia Project will be Stevan Milivojevic who is the Executive Director of LGBT Forum Progress, the first LGBT organisation in Montenegro. He is on...