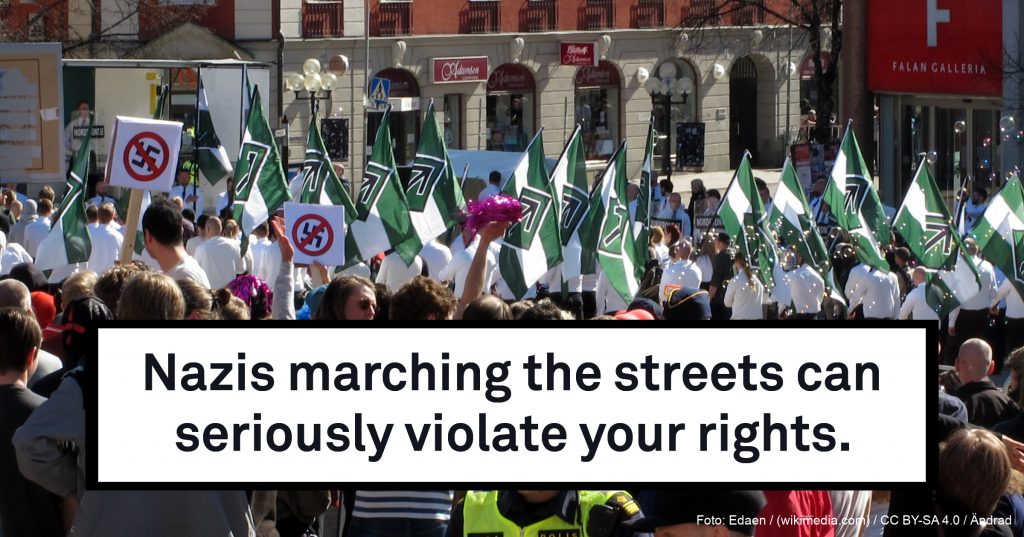 The trial against 15 people connected to the Nordic Resistance Movement (NMR), a Swedish Nazi organisation, begins today in the Court of Appeal for Western Sweden in Gothenburg. They stand accused of agitation against ethnic minority groups following their participation in a Nazi protest held in Gothenburg 2017.

Join the fight and support our efforts to ensure that civil and political rights are respected here.

Today, the trial begins in the case against the Nordic Resistance Movement (NMR), a Swedish Nazi organisation. 17 Nazis are on trial, 16 of them stand accused of illegal agitation against ethnic minority groups. The charges are largely based on a police report filed by Civil Rights Defenders. Here is what has happened so far:

The Nazi organisation Nordic Resistance Movement (NMR) is given permission to demonstrate during the Gothenburg Book Fair.

NMR plans to march past the Gothenburg Synagogue during the ongoing celebration of Yom Kippur, an important Jewish holiday.

Civil Rights Defenders appeals the demonstration permit. The Administrative Court decides to change and shorten the route of the march.

About 500 people demonstrate with NMR.

They wear uniform-like clothes, shields, and flags bearing the symbol of the NMR movement (Tyrrunan), which was also used in Germany by the Nazis in the 1930s.

They chant Nazi slogans and carry posters with pictures of well-known Swedes, many of them of Jewish descent, labelling them as “criminals”.

About 35 people are taken into custody by the police under suspicion of violent riot, among other crimes.

Civil Rights Defenders files a police report against several high-ranking NMR members. The report argues that NMR engaged in hate speech during the march. It particularly argues that contemporary forms of Nazi hate speech should be considered agitation against ethnic minority groups.

17 people who participated in the NMR demonstration are prosecuted. 16 are charged with agitation against ethnic minority groups. In the lawsuit, the prosecutor pursues Civil Rights Defenders’ line of reasoning.

The trial begins in the Gothenburg District Court.

All Nazis charged with agitation against ethnic minority groups are freed by the Gothenburg District Court.

The prosecutor appeals the court’s decision.

The trail begins in the Court of Appeal for Western Sweden.

Marcin de Kaminski, Security and Innovation Director at Civil Rights Defenders, appeared in the Swedish newspaper Arbetaren to comment on the leaks, their impact for journalists and activists, and the...

In this joint open letter, 146 civil society organizations and 28 independent experts worldwide call on states to implement an immediate moratorium on the sale, transfer and use of surveillance techno...

Since 14 July 2021, authorities have conducted around 30 coordinated raids at the homes and offices of several prominent human rights defenders in Belarus. 12 activists from Viasna Human Rights Centre...

The biggest demonstrations in several decades ripple through Cuba, as thousands across the country took to the streets yesterday to protest the lack of freedom,&nbsp...