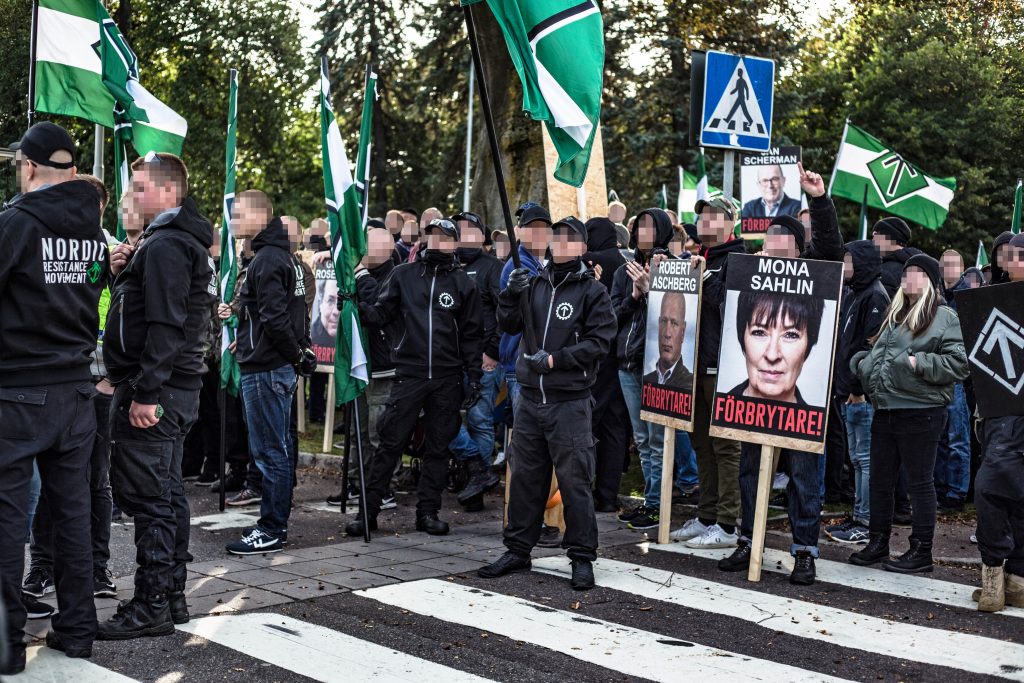 The trial against the Nordic Resistance Movement (NMR), a Swedish Nazi organisation, starts today in the District Court of Gothenburg. 16 people are being charged with agitation against ethnic minority groups, which is defined as a hate crime, as well as violent riot following their participation in a Nazi protest held in 2017. The indictment is largely based on a police report which Civil Rights Defenders filed against several high-ranking members of the NMR after the 2017 demonstration.

Sweden has obligations under international law to combat hate crime and racism by not allowing activities that spread racist propaganda. Based on this, Civil Rights Defenders decided to file a police report against several high-ranking NMR members after the 2017 demonstration, accusing them of engaging in hate speech during the march.

“The activities that the NMR organises and engages in take place at the expense of other people’s rights. Other individuals and organisations are often scared into silence. These are serious consequences of the NMR’s activities, and it is therefore important that their members are brought to justice for their criminal acts,” says John Stauffer, Legal Director at Civil Rights Defenders.

Need for a Broader Interpretation of Hate Crime Legislation

The indictment is largely based on Civil Rights Defenders’ line of reasoning on how the law which proscribes hate crime of agitation against ethnic minority groups should be interpreted.

Civil Rights Defenders argues that Swedish hate crime law has been interpreted too narrowly in the past, and that it currently only includes Nazi expressions and symbols that have strong connections to Nazi Germany, such as the swastika and Nazi salute.

“Authorities must start using a broader interpretation of the hate crime of agitation against ethnic minority group. For the law to continue to be relevant, even contemporary forms of Nazi expressions should be seen as hate crime. This includes clothes, symbols, and other expressions connected to the NMR,” says John Stauffer.

During the demonstration march in Gothenburg, the NMR members wore uniform-like clothes, shields, and flags bearing the symbol of the NMR movement (Tyrrunan), which was also used in Germany by the Nazis in the 1930s. The members chanted Nazi slogans and carried posters with pictures of well-known Swedes, many of them of Jewish descent, labelling them as “criminals”. In conjunction with each other, these aesthetic, verbal and written expressions spread a message of racial superiority and hatred of other ethnic and national groups.

The court judgement in the District Court has the potential to establish precedent, that could guide the police and prosecutor in their work relating to hate crime onwards. If similar cases are indicted in the future, the court judgement will also serve as a guideline for the courts. This is an important step in the work to prevent acts of racist hate speech in the future.

“Our position is that those who have been prosecuted should be sentenced. The hope is that the District Court establishes a broader and more up-to-date interpretation of Swedish hate crime legislation. It is time that racist and Nazi activities are deemed illegal not only in theory, but also in practice,” says John Stauffer.

Are you interested in knowing more about what has happened since the 2017 demonstration in Gothenburg? Find more information here (in English).

About the Nordic Resistance Movement

The Nordic Resistance Movement (NMR) is a Swedish Nazi organisation. It bases its activities on a violent and non-democratic ideology. NMR calls for violence against ethnic, religious, sexual and gender minorities. Historically, such agitation has been closely linked to violence, persecution and even genocide being committed against minority groups.

LGBTI+ Rights in Belarus: Rights Groups Worry their Country is on the Same Path as Russia

Homophobia and transphobia remain widespread in Belarus. Following a recent statement by the country’s Ministry of Health, the LGBTI+ community now worries that Belarus will follow the same path as Ru...

Today is the opening of the exhibition Hyper Human at the Museum of Science and Technology in Stockholm. Among the featured displays is our security programme Natalia Project – the world’s first secur...