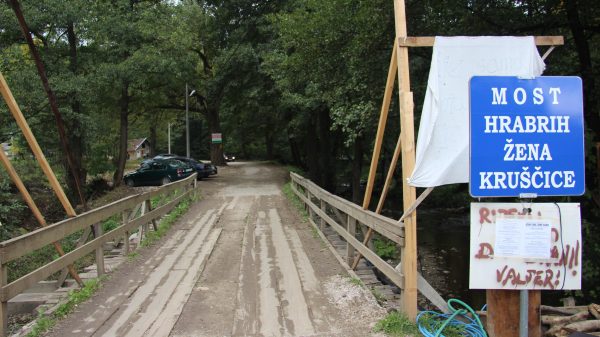 The violent approach by the police when dispersing a peaceful protest in Kruščica caused 29 injuries and 23 people were arrested.

On 24 August, around 250 police officers violently dispersed a peaceful assembly of approximately 50 people, the majority of whom were female local citizens of Kruščica, a village in the municipality of Vitez in Central Bosnia and Herzegovina. The group had gathered to protest against the construction of a mini hydropower plant.

Around 100 local police officers and 150 members of special police unit blocked the area, dispersed the protests, stripped women of their clothes and personal belongings, and violently dragged protestors into busses.

The violent approach caused injuries on 29 people, and 23 were put into arrest. One of the women passed out while the police dragged her to the bus. As her son rushed to help her, he was stopped by the police and, according to the witnesses, the commander-in-chief told two police officers that “he is yours all the way to the station”. The young man was subsequently pushed to the ground and severely beaten by the police. The violence later continued in the vehicle taking the young man to the police station.

Observers, mainly family members of the peaceful protestors, were prevented to follow the protests and help. Furthermore, in attempts to confiscate video recordings, the police chased the observers across the close-by fields.

The authorities and local police have continued to pressure the protesting villagers by issuing financial fines of 125 Euros. Moreover, Muris Đelilović has been accused of being the organiser of the protests, despite the fact that all villagers claim that the protest was a spontaneous assembly. The 23 people who were arrested were scheduled for trial on 6 November 2017. The Institution of Human Rights Ombudsman of Bosnia and Herzegovina has opened an ex officio investigation into the incident.

Civil Rights Defenders condemns the police misconduct and violence against the peaceful protestors, and calls on the state to recognise its obligations to adhere to the European Convention of Human Rights, in this case particularly Article 3 on the prohibition of torture and Article 11 on ensuring the freedom of assembly.

“We demand a proper and prompt investigation of the police misconduct and use of extensive force against protestors. The villagers should be able to freely exercise their right to peaceful assembly. We recall that, in accordance to international human rights standards, the organisers cannot be held liable for the organisation of the peaceful assemblies. We further demand the release of the arrested protestors. The prosecution of villagers that organised the peaceful protests in Kruščica must come to an end”, said Ena Bavčić, Programme Officer for Bosnia and Herzegovina at Civil Rights Defenders.