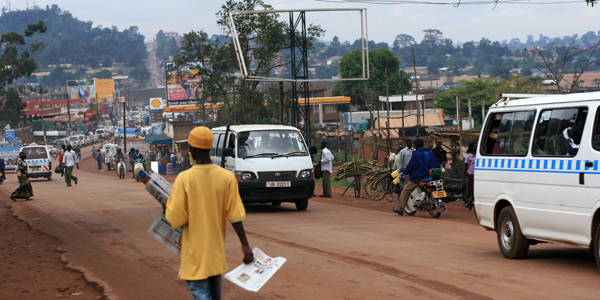 Kampala, the capital of Uganda

By the end of June, a human rights defender was shot dead in Uganda. The National Coalition of Human Rights Defenders Uganda, one of Civil Rights Defenders key partners in the country, has issued a statement (below) to call on the Ugandan authorities to conduct an impartial investigations to bring the perpetrators to justice.

Eleven human rights groups unequivocally condemn the extra-judicial killing of human rights defender Irumba Erasmus who was the coordinator of the Twerwaneho Listeners’ Club (TLC) activities in Rwebisengo District, and his friend Vide Kanyoro, by officers of the Uganda Police Force (UPF) and Uganda People’s Defence Forces(UPDF). We call on the Ugandan authorities to immediately conduct thorough, impartial, and transparent investigations into the matter, and bring the perpetrators to justice.

On the evening of 23 June, 2017, Irumba received a telephone call at his home requesting a meeting with Ntoroko District Police Commander (DPC) Gerald Atuhaire, District Internal Security Officer (DISO) Brian Babishanga, and Uganda People’s Defence Force’s (UPDF) 3rd Mountain Battalion based in Karugutu, Lt Col. Richard Muhangi. Irumba and Kanyoro arrived at Butungama Trading Center and met with the security officials at around 8pm. Shortly thereafter, Irumba was overheard by local residents shouting and demanding his money from the officials. The altercation escalated, Irumba and Lt Col. Muhangi were shot in the leg, while Kanyoro was beaten to the ground and also shot in the leg, according to first-hand witnesses.

Severely bleeding, Irumba and Kanyoro were then put in the boot of two private Toyota Premios, with the officials telling local residents the two men had been arrested and would be transferred to a hospital for treatment. Along the way to Ntoroko District, around Mubugando, the pair were taken out of the cars. Residents at Mubuganda heard cries and pleas begging to be spared until the two were shot. It is alleged that Irumba was killed by a single gunshot to the head. Their bodies were handed over to the Buhinga Regional Referral Hospital at Fort Portal, and Lt. Col. Muhangi was admitted for a gunshot wound in the leg.

Security forces allege that he two had contacted security officers attempting to buy 25 million Uganda Shillings (6,970 USD) worth of military ammunition. Although officials involved claim that Irumba and Kanyoro were carrying guns, police have only recovered weapons belonging to the security officials. In a press conference on 26 June, police spokesperson Asan Kasingye told journalists that DPC Atuhaire and DISO Bubishanga were arrested facing two charges of murder as the investigation continues, but also reiterated the weapons trafficking allegation against Irumba. The UPF has confirmed that charges have also been preferred against Lt. Col. Muhangi.

“While the circumstances leading up to the shooting remain unclear, there can be no doubt that Irumba Erasmus and Vide Kanyoro were victims of an extra-judicial killing,” said Ndifuna Mohammed, Chairperson of the National Coalition for Human Rights Defenders – Uganda and Executive Director HURINET-U. “The officers responsible must be held accountable, regardless of their rank or branch of service. Police should conduct a thorough, transparent, and impartial investigation into the murders.”The African Charter on Human and Peoples’ Rights, in particular Article 4 (Right to life) and Article 5 (Right to Dignity, Prohibition of Torture Cruel, Inhuman or Degrading Punishment and Treatment), prohibits extra-judicial killings by security forces.

Irumba had recently been investigating two high-profile corruption cases, although it is unclear if his killing was related to his work. One involved corruption at a health centre that led to the sacking of several administrators, and a second involved a local political leader who is now under investigation for illegally levied taxes. TLC believes that Irumba was killed to prevent him from revealing incriminating information against the officials involved, either obtained during the altercation or beforehand. Four other TLC staff members are currently facing spurious charges related to the possession of explosive devices and poison brought against them in connection with a land dispute.

“The killing of Irumba and Kanyoro is terrifying and casts more light on the challenging environment grassroots activists operate in,” said Gerald Kankya, Executive Director TLC. “An independent inquiry in to the killings and holding accountable those responsible will send a strong statement regarding the government’s resolve to promoting and protecting human rights defenders.”

Ahead of the 47th session of the UN Human Rights Coun­cil (21 June-15 July 2021), Civil Rights Defenders and 34 Eritrean, African and international organisations urge all states to sup­port the adop­­...