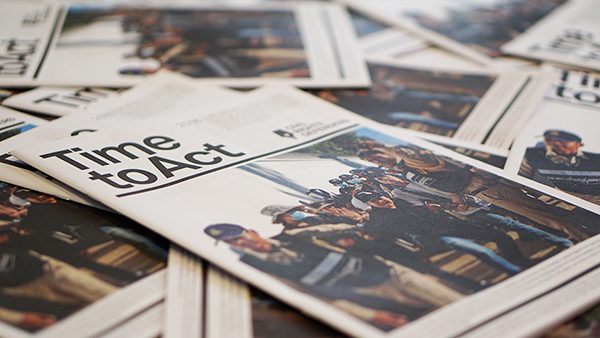 Read about our proactive initiatives such as the Emergency Fund, the Human Rights Innovation Initiative and Security Trainings for human rights defenders at risk. Among the initiatives in 2015, Civil Rights Defenders developed a Security Management Training which was conducted in Yangon in Myanmar.

2015 was an intriguing year in many ways, not least in Myanmar as millions of people exercised their right to vote. The election took place largely without allegations of fraud, misconduct and violence. A 50-year military rule came to an end, but challenges remain and it is yet to be seen if the new government delivers on human rights commitments.

In Cuba, the human rights record is alarming. We draw attention to the inadequate space for the civil society in relation to the implementation of Cuba’s trade agreement with the EU.

Time to Act 2016 highlights the work of brave individuals who work under incredibly difficult circumstances and endanger their lives when working to combat impunity and to strengthen the rule of law. In Russia, federal forces commit extrajudicial killings, enforced disappearances, torture and intimidation as tools of oppression. Civil Rights Defenders monitors human rights violations and provides legal aid to victims and their families.

Among several other things, the magazine also includes a presentation of this year’s winner of the Civil Rights Defender of the Year Award – Azerbaijani human rights lawyer, Intigam Aliyev.

In mid November, Sweden will be investigated by the UN Committee against Torture, which monitors if UN member states live up to the Convention Against Torture and Other Cruel, Inhuman or Degrading Tre...

Civil Rights Defenders is pleased to announce the release of the Internet Freedoms in the Western Balkan Region report. Developed in cooperation with the SHARE Foundation, the report presents in-depth...

What Worries Youth in the Enlargement Countries

Civil Rights Defenders invited youth from the six Western Balkans states and Turkey to write policy proposals, outlining the issues and challenges they face in their respective countries. Ranging from...

Civil Rights Defenders has released the ‘Security Guidelines for Human Rights Defenders” handbook, which was produced in late 2019. The 48-page report describes and counters the various threats faced ...

Letters from Cuba: For the Inclusion of Independent Civil Society in the PDCA