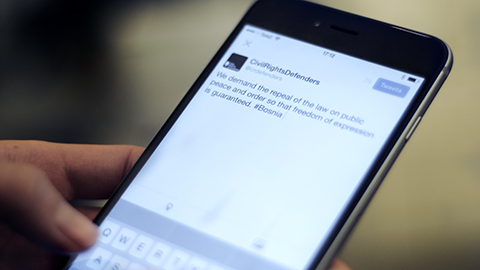 On 5 February, the Assembly of the Republic of Srpska, a Serbian entity within Bosnia and Herzegovina, adopted a highly controversial “Law on Public Peace and Order” which could further restrict the use of Internet and social media.

The adoption of the law could trigger a wave of censorship and self-censorship against independent media, civil society and critical individuals. According to the law, social media is now to be considered a “public place” and is therefore subject to sanctions for those who publicly criticise the work of state bodies or other public institutions.

Civil Rights Defenders condemns the adoption of this law. We demand its repeal in order to ensure that freedom of expression is guaranteed in accordance with relevant international human rights conventions.

“The law is highly restrictive and if not repealed and changed – every social media user in the Republic of Srpska is in danger of being persecuted or sanctioned,” said Ena Bavcic, Programme Officer for Bosnia and Herzegovina at Civil Rights Defenders.

Articles 7 and 8, as well as the definition of a public place, are in severe breach of the right to freedom of expression as defined by article 10 in the European Convention on Human Rights as well as articles 2 and 19 of the International Covenant on Civil and Political Rights adopted by the UN.