Fit in, instead of standing out, is a general security advice for lesbian, gay, bisexual or transgender (LGBT) people in Uganda. “It is a matter of survival”, says Brian Nkoyooyo, Director of the grass root organisation Icebreakers that works with LGBT youth. Since he is a well-known gay activist in a country that is considered to be one of the worst countries for LGBT people, he is always on guard: “I live every day as it was my last”. 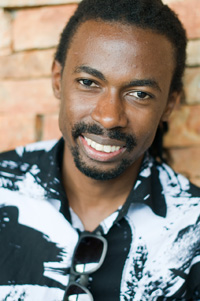 At the age of 16 Brian Nkoyooyo hated himself so much that he went to a pastor who literally tried to beat the demon out of his body. Up to that point, he had been surrounded by people who only spoke ill of homosexuals, saying that LGBT people are animals or that they do not have hearts. Brian felt different from his schoolmates and he did not know anyone who was like him.

It is not a standard procedure to try to “cure” homosexuality with exorcism in Uganda. But it is common to be disowned by one’s family and kicked out of home.

“If your family love you too much to disown you, they take you to church to pray for you so that you can change”, says Brian.

Despite prayers and beatings, Brian was not “cured”. One day, as he started to learn computers, he went to an Internet café. By coincidence the user before him had visited a website of a gay organisation. Brian started reading and realised that he was not alone, and that he was not sick. After that day he could start to accept himself, and since then he has been devoted to helping youth who are in the same situation as he was.

Growing up in a neighbourhood where gender based violence is the order of the day, where homosexuality is considered a disease, and being bullied at school because he was a tiny boy, Brian’s incentive to work for human rights comes from deep within:

“All this affected me in one way or the other. I do not want future generations to grow up in such a society. I want better for them”.

Today Brian is Executive Director of Icebreakers Uganda. It is a grass root organisation founded in 2004 that function as a node for small networks, in both rural and urban Uganda. The discretely hidden office in Kampala is open throughout the week and plays an important part as a gathering point where people can meet and share experiences, use the library and get Internet access.

The organisation plays an important part in educating men and women about health, with regard to risky sexual behaviour, with emphasis on HIV/AIDS, and the right to health services, which LGBT people are commonly denied.

The organisation strives to help people accept and be comfortable with their sexual orientation and gender identity, but calls for caution when coming out:

“The society we live in is a hostile one and they need to be aware of the risks. We advice people to try and fit into society by being involved in community activities like charity drives and meetings so that the society looks at them as part of its contributors and upright citizens”, Brian points out.

LGBT people who are considering going public with their sexuality and gender identity must take into consideration that their decision might cause them losing their job, apartment or worse.

“We always encourage our members to make sure that people see the real them. Sexual orientation is just a part of that. They have to show society that they are intelligent, hardworking, loving and law abiding citizens. After seeing that, we believe society will not be bothered by that tiny part of their life of being homosexual.”

Brian describes his own coming out as a long journey. He went public on local television in 2007. Afterwards he became so harassed by students and teachers at the University where he studied art and industrial design that he dropped out. Even though it was his last year. He was treated like a lepra and most of his friends abandoned him.

“After that I decided to be open. Anyone who was interested in becoming my friend had to know who I really was. But then I also had friends who encouraged me to be myself. This also attracted some of my old friends back. With that, I got the strength to be myself, and my family has supported me throughout the journey because I prepared them for it.”

Life as an LGBT person in Uganda is difficult. But it also differs depending on social class. People living in a lower class area are more exposed to the risk of being attacked than those living in an upper class area.

“This is due to the fact that people living in slum areas are mostly unemployed and less educated and therefore have the time to meddle in other people’s business. These people are also frustrated due to a hard life and constant lack of necessities and tend to become hostile”.

Upper class people, on the other hand, lead busy lives and have less time to meddle in other people’s business. This does not mean that they are more tolerant toward LGBT people though.

“But they are less violent and can hold a decent conversation, trying to understand”, says Brian.

The prospect for moving to an upper class area is small, however. The majority of people within the LGBT community are school dropouts. They are unemployed, and some have been disowned by their families. They cannot afford to live in an upper class area. And middle class areas, in which some of them live, are not very different from slum areas, according to Brian.

In 2009, an Anti Gay Bill was tabled in the Ugandan Parliament, which would clearly violate human rights, if passed. The purpose of the Bill was to strengthen the current ban on same-sex relations. The Bill stated that consenting adults of the same sex, involved in a sexual relationship, would face the death penalty. Failure to report knowledge about a homosexual relationship could also lead to harsh punishment. International attention and strong critique resulted in the Bill being withdrawn from the table.

In December 2012, the Anti Gay Bill from 2009 has been brought back in Parliament. It is unclear what changes have been made to the original draft, but the LGBT community fears serious consequences. The Speaker of the Parliament Honorary Rebecca Kadaga expressed her hopes of adopting the Bill before the end of 2012 as a Christmas gift to the Ugandan people.

If the Bill is passed it will affect the organisations working for LGBT people’s rights seriously. Arrests and intimidation will immediately begin to take place and LGTB people will face reprisals from the general public. It is most likely that organisations will have to temporarily resettle people and activists.

Ironically, in 2009 the Anti Gay Bill actually led to a positive development for the LGBT movement in Uganda. Previously, only a few civil society organisations had included LGBT people’s rights in their work for human rights. With the tabling of the bill, a coalition of several civil society actors was formed to fight the Bill.

Art and culture as tools

On 7 November 2012 the culture group Talented Ugandan Kuchus (TUK) performed a show promoting tolerance and human rights and celebrating diversity, at the National Theatre. The show had barely gone its first hour when an unidentified policeman abruptly closed it down. More police officers arrived and the audience, approximately 500 people, were ordered to evacuate the premises.

“Kuchu” is a term that the Ugandan LGBT community used as a code or slang for LGBT people, to identify other LGBT persons, that the heterosexual community did not understand. Some media claim that Kuchu was used an insult, but that is not true according to Brian.

No one was arrested during the raid but afterwards Brian, who is Production Manager for TUK, received anonymous phone calls with threats to his life. He was able to relocate with the help of East and Horn of Africa Human Rights Defenders project, a regional human rights organisation. Other members of TUK were traumatized. The Police had forced some of them to the leave the theatre with their costumes still on and many of them feared that they would be arrested.

“Some of them have had it rough with their families since they were outed”.

This was the first attempt to bring artists on board in the struggle for LGBT people’s rights. Many artists do support them, but only in secret due to the fear of losing fans and contracts. During the event, TUK launched their first music album “There is Hope”, containing the Ugandan LGBT Anthem “Moving Forward”, among other. Some of the key artists even performed side by side with TUK at the event.

In his work to advance human rights, Brian uses art as a tool because he thinks that paintings provoke the human mind, leading to critique and dialogue. And with music he says he can reach different people regardless of age, because almost everyone listens to music. 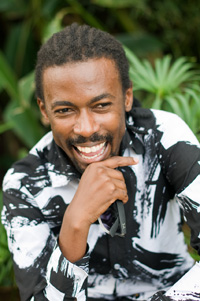 “As an activist, I can stand up and speak out. People may choose to listen and other may not. I can easily be made to shut up. But with art, it lasts for centuries and it reaches a wider audience. I prefer use of art and music because I know the biggest number of the community appreciates it compared to long boring speeches”.

Despite being constantly afraid, for his family’s sake, his gay and straight friends and himself, Brian continues to work because he has a vision for the LGBT community and Uganda at large.

“A dream where people live harmoniously regardless of their differences: sexual orientation, race, gender and more. A society full of love”.

Born: 10 June 1984 in Kampala, Uganda.
Profession: Director of the LGBT organisation Icebreakers Uganda
Education: Studied art and industrial design
Interests: Music, painting, graphic design and dancing
Other: Brian’s music can be found on Soundcloud.com, name: Brayo Bryans and his artwork can be found on facebook: Afrotwink Art & Design (of which some have been exhibited at Yale University)