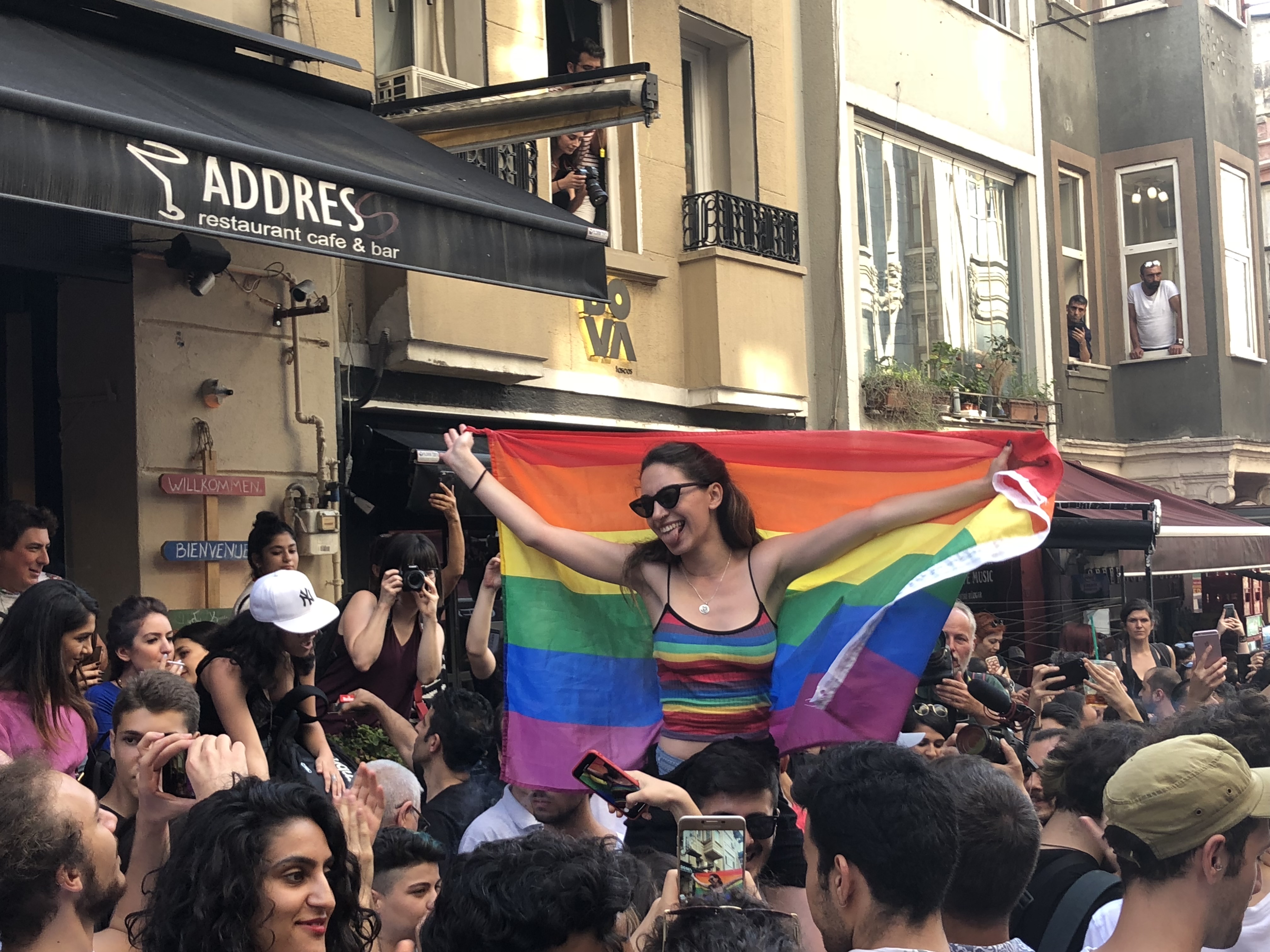 Hundreds of members of the LGBTI community defied the ban and took part in Pride events in central Istanbul, Turkey, on Sunday, 2 July. Photo: Elif Akgül

Turkey’s lesbian, gay, bisexual, trans and intersex, LGBTI, community celebrated the Istanbul Pride parade on Sunday, 1 July 2018. The organisers pressed ahead with the march despite Turkish authorities banning the event for the fourth year in row and the security force’s harassment to disperse the marchers. At least eleven persons were taken to Vatan Police Headquarters in Istanbul, according to the reports.

Elif Avcı, a member of the Istanbul LGBTI+ Pride Week Committee told Civil Rights Defenderds that despite all ban, pressures, and harassments; they celebrated the Pride. “We do our individual Pride marches everyday while going to school, work, hospital, market… No one can prevent us coming together once a year to manifest that we are here and we will be here,” said Elif Avcı.

Civil Rights Defenders congratulates the courage of all activists who participated in the Istanbul Pride to stand up for their rights and reminds the Turkish authorities that rights to freedom of expression and peaceful assembly are universal human rights. These rights are protected not only by the international law instruments that Turkey is party to, but also by the Constitution of Turkey.

In June 2003, Turkey’s first ever public LGBTI Pride March was held in Istanbul. For more than a decade, the Istanbul LGBTI community peacefully celebrated Pride. Pressures on Turkey’s LGBTI community have been intensified in the last years. Since the 2014 Istanbul Pride, in which approximately 100.000 people attended, Pride marches have been banned in Istanbul and the nation’s capital Ankara by authorities citing “social sensitivities” and “public order”. Groups who attempted to celebrate Pride in 2015, 2016 and 2017 were met with police violence, including water cannons, tear and pepper gas, followed by detentions and prosecution. The bans were not limited with the Pride March but included other activities such as film festivals. In November 2017, the Ankara Governors’ Office imposed an indefinite ban on all public activities organised by LGBTI organisations.

This year, Istanbul Governor’s Office announced on 29 June that the Pride Parade to be held on 1 July was banned. However; shortly after this announcement, the organisers of the Istanbul LGBTI+ Pride Week, issued a statement defying the ban and calling it “discriminatory and illegitimate”. The statement said, “This march is organised in order to fight against the violence and discrimination fueled by that governorship decision. We would like to inform the press and the public that we will go ahead with our prideful march with the same ambition as we had before”.

On 1 July, the riot police started to take security measures around Taksim Square and Istiklal Avenue, where the march would take place. All streets leading to Istiklal were blocked by the police. However, in the afternoon it was announced that a last-minute agreement was reached and authorities lifted the ban partially, with the condition of marchers remained confined to just one street to read a press statement and then, disperse. The press statement  conveyed that, “We do not recognize this ban”. After reading the statement, police told the demonstrators to disperse. Later on, it was reported that the police intervened small groups trying to reassemble on different streets. In some incidents police used tear gas and fired on people with rubber bullets.

Civil Rights Defenders expects an investigation to disclose whether the security forces have used excessive power over the activists and if this is the case, that the officials having used unlawful force be prosecuted. The organisation also calls on the Turkish authorities not to prosecute the detained activists.

Turkish authorities must stop unlawful and arbitrary bans on LGBTI activities and ensure LGBTI persons enjoy all their rights as equal citizens of the country.

Civil Rights Defenders calls upon Serbia’s authorities to respect its human rights obligations during the state of emergency declared in light of the COVID-19 outbreak. While we recognise th...

Civil Rights Defenders demands that Serbia honors its commitments to the European Convention of Human Rights, namely regarding the right to security and the right to freedom of expression, following a...