Ethiopia to Release Political Prisoners – Promised but not Guaranteed

Since Wednesday 3 January, news about the potential release of political prisoners in Ethiopia have captivated large international media outlets and observers. As part of the breaking news was also the planned closure of the notorious “Federal Police Force Central Bureau of Criminal Investigation” (Maekelawi), where political dissidents have been abused, tortured, and sometimes killed, both during the current and the previous regimes.

No clear and detailed plan as to how these promises will be materialised has yet been given, and the news have been received with mixed feelings of guarded endorsement and deep suspicion, both at home and abroad.

Civil Rights Defenders welcomes the Ethiopian Government’s promises on both counts, provided that a clear and binding plan for implementation is put in place immediately. Although the release of political prisoners, if implemented, is long overdue, it is in line with the national and international human rights obligations which Ethiopia has signed. Furthermore, if complemented by additional measures, the move can serve as a turning point and initiate an inclusive and constructive political dialogue. 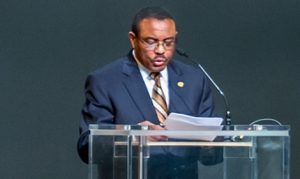 During a press conference on 3 January 2018, Prime Minister Hailemariam Desalegn said that Ethiopia plans to release political prisoners and close down the “torture chamber”. (This photo is not from the press conference).

The Ethiopian Prime Minister and other senior officials have publicly admitted that the country is experiencing a dangerous political crisis. A crisis which has resulted in the displacement, deaths, and arrests of thousands of Ethiopian citizens only in the last several months.

The magnitude of human rights violations, mainly perpetrated by government forces, has escalated in the absence of timely, tangible and meaningful political solutions. As the government forces continue to use lethal and violent means for dealing with the protests across the nation, the public anger has fomented. At the same time, tensions and violent confrontations between different ethnic groups have become a significant factor that further sparks the crisis.

In this context, the promised release of political prisoners could ease the tensions and facilitate peaceful engagement, and the gross human rights violations could be reduced significantly. However, it is important to recognise that the Prime Minister does not use the term “political prisoners” in his promise, but instead he speaks around it.

To close one of the most most notorious “torture chambers” is a good symbolic gesture. However, former inmates and families of prisoners across the country testify that the practice of abusing and torturing suspects is widespread. It is therefore imperative to introduce change, both in attitude and in the modus operandi of Ethiopia’s police force investigation methods. Without such plans, the closure of Maekelawi will fall short of any meaning in terms of respecting the basic rights of suspects in Ethiopia.

Within the confines of the two promises, Civil Rights Defenders calls upon the government of Ethiopia to: