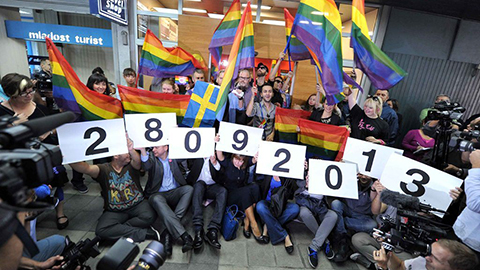 The Pride Festival in Belgrade started this weekend. For ten days there will be full focus on LGBT people’s situation and rights. The program includes panel discussions, music and a long-awaited Pride Parade.

During the festival, influential and prominent guests are invited to speak about the situation for LGBT people in Serbia. For the second year in a row Sweden’s EU Minister Birgitta Ohlsson will attend and give public speeches. The Swedish group Army Of Lovers are one of the newcomers. LGBT issues are close to the members hearts, and they often participate in Pride Festivals.

The festival’s main act, the Pride Parade will take place on 28 September. Civil Rights Defenders’ Program Director for the Western Balkans, Goran Miletic, is concerned that the Serbian government might ban the march again this year – for security reasons. If the march is stopped, this will be the third consecutive year.