Pride Parade Risks Getting Banned Third Year in a Row 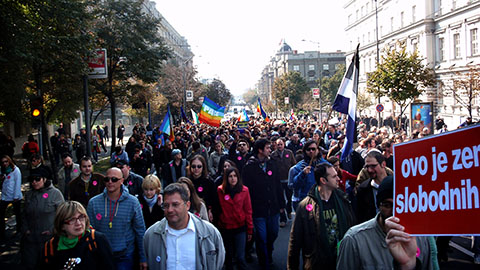 Belgrade Pride Festival takes place between 21 and 29 September. The festival has been making headlines since 2010, when police and thousands of homophobic protesters clashed in brutal scenes on the streets of Belgrade. Ever since then, the Serbian government has banned the festivals main act, the Pride Parade. Civil Rights Defenders fears that the government will take the same decision this year and ban the parade, thereby restricting the rights of LGBT groups.

“My hopes are that the government ceases to ban the Pride Parade in Belgrade and that the violence will decrease from counter-demonstrators. But unfortunately there is a risk that the government will take the same decision this year and stop the parade,” says Goran Miletic, Civil Rights Defenders, Programme Director for the Western Balkans.

Civil Rights Defenders is one of the main organisers of Belgrade Pride and is working hard to make the festival a forum and a meeting place for LGBT, as well as focusing on increasing public awareness of gay rights.

“My dream is to organise a Pride festival of the same size like the one in Stockholm, having in mind that Belgrade and Stockholm have the same number of inhabitants,” says Goran Miletic.

The 2013 years’ festival starts with an international conference on freedom of assembly for LGBT groups, followed by daily debates, exhibitions, plays, concerts and movies. On the 27th September, Pride Forum will be organised for the fourth time. During the event, many international guests will hold speeches to give their support for the Pride Parade. One of the participants is Sweden’s EU-minister Birgitta Ohlsson, who also attended the festival year.

“Pride Parades are a litmus test for freedom and democracy in Europe. It is a true honour for me to have been invited to speak at Belgrade Pride this year again. Because human rights are my pride,” says Birgitta Ohlsson.

The first attempt to organise a Pride Festival in Serbia happened in 2001, several LGBT groups initiated a march through downtown Belgrade. At that time the police had no capacity to prevent riots or protect the demonstrators who were attacked by counter-demonstrators. Many were injured and the march was cancelled. It wasn’t until 2009, that a parade was initiated again, but again this time it was prevented by the government who at the last moment disallowed protesters to conduct the march in Belgrade. Instead a park outside the city was allotted for the parade.

2010 became a historic year. The first parade in Belgrade, Gay Pride March, could be carried out because the Serbian government promised police presence. Around a thousand protesters took to the streets of Belgrade but were met by over five thousand counter-demonstrators. Many were injured, both civilians and police and this led to bans of the parades in both 2011 and 2012. The government stated that they could not guarantee safety for participants and organisers.

“Belgrade Pride is important for the LGBT community in Serbia since they want to exercise their right to peaceful assembly,” says Goran Miletic.

According to Goran Miletic LGBT activists in Serbia are especially vulnerable and their situation is difficult. Civil Rights Defenders job is to stand up for vulnerable human rights defenders in their struggle for human rights.

A sad but common occurrence is violent threats toward the organisers and participants of Pride and according to Goran Miletic the situation is the same this year.

“Threats have become normal for organisers during these years. Unfortunately, judiciary is slow even when perpetrators are threatening in their real names on Facebook,” says Goran Miletic.

Despite the threat of banning the festival and threats from homophobic groups, participants and organisers are determined to conduct this year’s Pride Parade. Expectations of audience attendance is however low.

“We have the lowest expectations when it comes to audience and people are still really afraid to come after the violence in 2010,” says Goran Miletic.

Facts about Serbia and LGBT:

Despite the prohibition of discrimination based on sexual orientation contained in several laws, and the Constitutional Court decision of December 2011 that the ban of the Pride Parade in 2009 was unconstitutional, members of the LGBT community still do not believe that the judicial system can provide them with adequate protection.

Knowledge and understanding by law enforcement officials of LGBTQ rights is still limited. The general perception of LGBT persons is still inadequate. According to research in 2010, 67% of citizens think that homosexuality is an illness, 56% feel that homosexuality is dangerous for society and 53% opined that the State should actively fight against it.