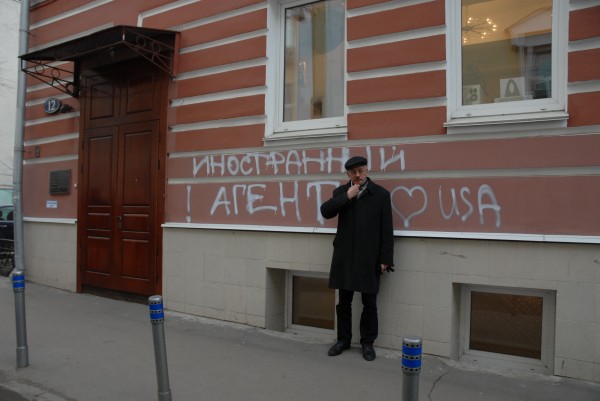 The Night Watch – this is what a group of about 20 Russia Young activists called the late-night act of vandalism on the premises of two internationally funded Russian human rights organisations as well as the picket in front of Transparency International later that day. The buildings were vandalised with chalk drawings saying “foreign agent” and “I love USA” on the same day as the “foreign agents” law came into effect.

Memorial, a leading human rights organisation in Russia and a partner of Civil Rights Defenders, and the organisation For Human Rights, found chalk drawings saying “foreign agent” and “I love USA” on their building. The message is consistent with the overall political and societal climate toward human rights work.

In a Facebook statement following the picket and chalk drawings, Russia Young activists – who propagate for independent Russia, unaffected by foreign influences – said the purpose of their actions was to “remind” foreign agents to register.

Russia Young allegedly drew on the buildings on the night of 21 November, followed by a picket in front of Transparency International with slogans “Come out of the Dark” later that day.

The vaguely worded new law requires nongovernmental organisations that receives foreign funding to register as “foreign agents” if they engage in political activities. It was passed in the State Duma this summer and ratified by Vladimir Putin in July – two months after his reinstallment as president.

Both Memorial and For Human Rights have announced they would not declare themselves as “foreign agents”, a term many Russians still think of as synonymous to foreign spies.

Russian feminist and LGBTI+ activist Yulia Tsvetkova may face up to six years in prison on charges of pornography, after sharing some of her artwork on social media. Yulia Tsvetkova is known for her i...