One of Ethiopia’s very few independent journalists, Mesfin Negash was harrassed by the government to the limit that he had to go into exile. Today he lives in Sweden but continues to spread news about human rights and politics in Ethiopia, trying to alert the international community to the situation in the country: “If you took a balance sheet of repression, you would see that Ethiopia is equal with Burma”, says Mesfin Negash. 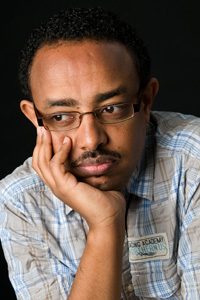 In Mesfin’s view, journalism is the most risky profession in Ethiopia, besides being an outspoken and critical politician. He compares being an independent critical journalist with going into a jungle full of dangerous predators.

“You don’t know their rules, their territory and their expectations. Whenever they feel like it, you will be a victim”.

In February 2012 Mesfin Negash was granted asylum in Sweden, after what he describes as a tormenting journey through the asylum process that lasted for one year and three months. He smiles when he is asked about the accusations that led him to flee his country:

“One funny part about Ethiopia is that you don’t really know what crime you are being accused of.”

Exile the only option to oppose the government

Mesfin and his colleagues at the independent newspaper Addis Neger were busy working when they heard rumours that they would be accused of supporting terrorism and undermining the constitution. After confirming that the threat was real, they sat down to discuss the options.

Changing the tone and style of the newspaper was one, but as Mesfin puts it, “that would be equal to killing the newspaper” and they did not want to compromise their professional or personal integrity. They did not want to close the paper either, because that would be to give in to the government. Furthermore, closing down the newspaper could be taken as a political statement about the situation, which could put them in danger. There was only one choice left. Mesfin says that it was a group decision to go into exile.

“It was the only option to deny the government what they wanted”.

About the same time as Mesfin and his colleagues went into exile, Ethiopian authorities publicly denied that there was any plans to charge the journalists. But two years later, the prosecutor charged him and another colleague. By then, they had added new charges, in addition to the original one of supporting terrorism, namely terrorism, espionage and treason. The first charge was later dropped. The reason given by the prosecutor was that the “defendants were included by typing error”. The terrorism charge carries serious punishments as the case of Martin Schibbye and Johan Persson demonstrates. The two Swedish journalists were arrested by Ethiopian forces on 1 July 2011 and have been held in prison since then. On 27 December 2011 they were sentenced to 11 years imprisonment for supporting terrorism.

According to Mesfin, charging journalists for such fictitious crimes became the main instrument to keep the public docile and silence critics.

The court found Mesfin guilty of espionage and of supporting terrorism in absentia, but the verdict that awaits him has not yet been delivered. The judiciary in Ethiopia, however, is not independent. According to Freedom House, the rule of law is weak and the legal system is subject to strong political pressure.

“My verdict is in the hands of the government. It is a political judgement. We could all be freed tomorrow or sentenced for 20 years”, he says.

He recalls an incident when the regime imprisoned an 84-year old man. His son was found guilty of terrorism and the 84-year old father was charged for collaborating with terrorists. In Ethiopia, you don’t know what can happen to you or people you know, or when and why.

“No evidence is required either, they can create them”.

Although the illiteracy rate in Ethiopia is high (two out of three Ethiopians, according to BBC) and radio would reach more people, Mesfin chose the press. The reason is that radio requires more advanced equipment and huge investments compared with newspapers.

There are no private television companies and only two semi private radio stations in Ethiopia. The first one is affiliated with the ruling party and the other is too shy to criticise the government, according to Mesfin. When asked about independent press, Mesfin answers:

“That depends on how you define independence! There is independent press covering sports and fashion, business and soft political subjects. None of them are in a position to set an agenda. The government consider the remaining papers either loyal or ineffective, therefore tolerable. But another vocal independent newspaper that covers sensitive political issues is facing 100 charges at the moment”.

Journalists in the country are either co-opted by the ruling party, neutralized or going through hardship, Mesfin adds.

The types of harassments Ethiopian journalists and other human rights defenders are experiencing vary. In the 1990s, arbitrary arrests, physical abuse and torture were very common. After 2005, violations became more systematic. The government started abusing the criminal justice system to ensure control:

“Everybody knows that terrorism is a phony charge”.

One journalist was sent to prison for 14 years. During her interrogation she was asked to testify against other defendants. She refused and for that she was denied medical treatment when she fell ill. Another journalist, sentenced to the same period of imprisonment, reported to the court that he had been beaten. Eskinder Nega, who was recently awarded the PEN America’s award, was imprisoned six times. Now, he is accused of terrorism and is standing trial with 23 other defendants, including six journalists. Most recently, the police arrested him as he was picking up his 6-year old son from school. The boy was crying, shouting: “They are killing my father”. Mesfin gets very upset when recalling this:

“It is inhuman to arrest him in front of his son. They could have brought him in earlier. It is a brutal dictatorship!”

But these ways of harassing people form part of the systematic plan to silence critics and send a message to others, Mesfin believes.

For the likes of Mesfin it is not an easy task, even just in a practical sense, to run a newspaper due to all the harassment. Some of the harassment techniques are laughable; Mesfin recalls what happened to the only vocal newspaper a few weeks back. For months, the weekly Fitih’s office had no electricity on Thursdays. And Thursday was the day it was finalised and sent to print. All other offices in the building and vicinity had power. Therefore, the staff must move to another office every Thursday.

One Thursday, though, the person in charge of cutting the electricity made a mistake. Mesfin laughs a little before continuing the story:

“He forgot to shut off the power line in the toilet, they had electricity there”.

The journalists brought their computers to the corridor and were able to send next day’s issue to print.

All this together creates an environment of fear and self-censorship, and many journalists leave the profession.

The government has effectively crippled civil society. In 2009, the so called Charity law was passed, which provides that organisation working with rights issues must have at least 90 percent of their income from local sources, and international NGOs (non-governmental organisations) may not work on rights related issues. In a country where more than five million people live on food aid one can hardly expect to find rich people risking their business to support such organisations.

“It is a policy designed to kill them softly”.

International NGOs are not allowed to operate in rights advocacy or protection; even fact-finding missions from the UN have been stopped. Without brave individuals, either living in Ethiopia or disguising to get in, the information about human rights abuses would not reach outside the country’s borders.

While in exile, the Addis Neger news crew launched a website just before the May elections in 2010. With the help of reporters inside Ethiopia they still run the paper. Today the website is blocked in the country but there are other social media outlets that are still running. None of Mesfin’s colleagues can make a living of their profession though, rather they are paying in order to maintain the website and compensate their reporters in Ethiopia.

Mesfin tries to make the international community aware of what is going on in Ethiopia. He equals the repression in the country to Burma or Iran.

“Western countries turn a blind eye to Ethiopia. But they stood together against the junta in Burma”.

One of the most famous opposition politicians in Burma is Aung San Suu Kyi, her name and destiny is well known in the world. Her equivalent in Ethiopia is not. This woman was a politician who was sentenced to life in prison, and spent one year in solitary confinement. She served yet another year before she was pardoned – after reading a confession crafted to humiliate her, admitting to things she has not done. It was broadcast on national television. 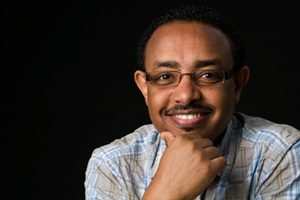 “What is more repressive?”, asks Mesfin, though stressing that the actions toward Aung San Suu Kyi are gruesome.

“What we can do is to keep on telling the stories. I think the time will come”, says Mesfin Negash.

Has also worked for NGO’s in Ethiopia, one with HIV/AIDS-prevention and life skill training

Human rights at risk in Ethiopia

Three journalists are already sentenced to long time in prison for alleged involvement in “terrorism.” Another six are expecting their sentence among which one, Eskinder Nega, is awarded the 2012 PEN America prestigious award. Independent journalists are working under a tense environment; one of them is facing more than one hundred ridiculous charges including printing letters sent from prison by three of the defendants accused of “terrorism.” These measures are intended to terrorize citizens and distance them from expressing their views.

There are hundreds and probably thousands nameless citizens languishing in areas where neither local nor international human right advocates are allowed to work. NGOs working on rights issues are considered by the authorities as potential enemies or traitors.

In 2009 the infamous Charity law was passed in Ethiopia. The law prohibits international NGOs to work on rights issues and local counterparts must mobilize 90% of their income from local sources, which in practical terms means that they are forced to close down their projects.

Citizens cannot exercise their right to assembly or forming associations unless they submit their allegiance to the ruling party. Membership of the party is a key for young graduates to get job in government or affiliated organisations. The same holds true to the business community: party membership matters.

The ultimate goal of the ruling party is monopolizing power and resources. They are denying the formation of any meaningful constituency and silencing voices for human rights that are enshrined in the Constitution of the country.