Attack Against Journalist Vladimir Kovačević Must be Investigated

A sign saying: “Stop attacks against journalists in BiH”.

Vladimir Kovačević, a journalist from Bosnia and Herzegovina, was attacked outside his apartment on 26 August. In light of the increased violence against journalists in the country, Civil Rights Defenders requests an immediate and impartial investigation into the attack.

In the evening of 26 August 2018, two masked persons physically attacked the local TV correspondent, Vladimir Kovačević, in Banja Luka, Bosnia and Herzegovina. The journalist was on his way home after reporting about the latest protest organised by “Justice for David” – a group that calls on the authorities to properly investigate and revolve truth about the murder of a young student from Banja Luka. Outside of his apartment, Vladimir Kovačević was beaten with metal poles, and left with severe injuries. 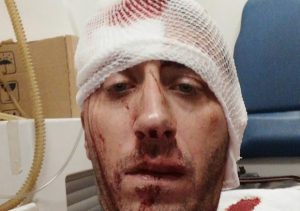 According to BH Journalist Association – a local partner of Civil Rights Defenders – the violence against journalists has increased in the country. In 2018 alone, they have reported of 14 physical attacks and five death threats against journalists. In addition, the level of impunity for these crimes are high.

In light of the increased violence against journalists in the country, Civil Rights Defenders calls upon the authorities to promptly conduct full and impartial investigation into the attack against Vladimir Kovačević. We urge the authorities to not continue the trend of impunity, but rather to prosecute the attackers of this and all other attacks against journalists in the country.