Civil Rights Defenders expresses its concern that yet another human rights defenders has been subjected to unprovoked harassment by the police in Prijedor a municipality in Bosnia and Herzegovina in recent days. Nikola Kuridza of Kvart, a partner organisation of Civil Rights Defenders had been visiting the residence of a colleague when the police arrived unannounced and started to threaten all those inside. 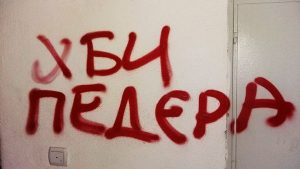 This is the second attack against Kvart in recent days.

Neighbours had complained of loud music coming from the apartment and had requested that the guests leave the apartment. The police arrived accusing all those inside of public disturbance solely on the grounds of playing loud music. Nikola then made a comment to the police that ”the criminals are in the government and the police who are arresting innocent citizens” after which he was pushed into the elevator and beaten with a police baton. The police then dragged him down five floors, pushing him into an awaiting car where they continued to beat him.

”This attack clearly demonstrates how human rights defenders in Bosnia and Herzegovina continue to be harassed by the authorities for exercising their basic freedoms such as the right to freedom of speech and freedom of association. Civil Rights Defenders will continue to monitor the situation closely and put pressure on the authorities to carry out a thorough investigation into this matter,” said Ena Bavcic, Programme Officer for Bosnia and Herzegovina at Civil Rights Defenders

At the police station he was verbally abused and prevented from making a call having being forced to spend a night in solitary confinement without any charges levied against him. According to Nikola and witnesses he was at a loss regarding this treatment because he had showed no signs of resistance that could provoke such violent treatment. The following morning he was released having received an apology from the colleagues of the arresting police officer. However, this was done after Nikola had been coerced into signing a false statement that did not mention any instances of police brutality

Police misconduct is in direct breach of Article 3 of the European Convention of Human Rights, which clearly details the prohibition of torture and inhuman or degrading treatment of an individual. Civil Rights Defenders condemns all police violence against human rights defenders and reminds the authorities in Bosnia and Herzegovina of their obligations to prevent and/or investigate every case of torture and we urge a full investigation into the matter.

Kvart members are part of the Initiative “Jer me se tiče” (Because I Care) which organises The White Armband Day. The event aims to draw attention to the persistent denial of crimes and discrimination of non-Serb victims by the local government in Prijedor. The symbolism of the white armband comes from the 31 May 1992, when the Bosnian Serb authorities in Prijedor (later in some other places) issued an order through the local radio demanding the non-Serb population to mark their houses with white flags or sheets, and to put a white armband on their sleeve when leaving the house.

This was the beginning of a campaign of extermination in which mass executions and rapes were carried out, concentration camps were established for non-Serbs and other crimes were committed in a systematic manner, resulting in the forced removal of 94% of the Bosnian Muslims and Bosnian Croat population from the territory of the municipality of Prijedor. The fourth protest-march calling on the government of Prijedor to make a monument for the 102 children killed in Prijedor during the war was held on the 31 May 2016. The event gathers some 1000 supporters every year.