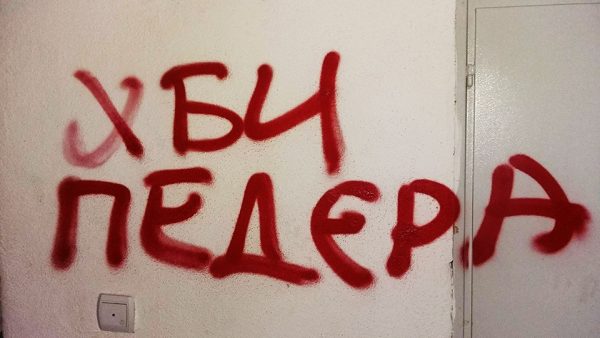 Civil Rights Defenders strongly condemns the pressures against human rights defenders in Prijedor as well as the attacks on their premises. We urge the authorities to prosecute and sanction these attacks as well as to ensure protection for their future activities.

On Tuesday 31 May 2016, after the White Armbands Day, the third attempt in six months occurred to intimidate members of our partners, the Youth Organisation Kvart. The event itself was peaceful with no major incidents until a member of Kvart addressed the gathered mourners. Several hooligans then threatened him by saying that “they know where he lives.” This was followed by forceful entrance into their premises during the same evening, after the crowd left Prijedor. Around six young men entered the building carrying sticks with the intention to make damage. Staff members managed to prevent the attack. The police took the statements of the members of the organisation but did not file a case, with the explanation that there was “no clear damage”.

“The attacks against Kvart are continuous, while their constant impunity is a signal that human rights defenders working in smaller communities in Bosnia and Herzegovina do not have enough protection from the government and internationals. Kvart is an organisation doing valuable and courageous work with young people facilitating access to information about human rights abuses and fostering reconciliation in a community where the rate of war crimes was extremely high. Pressures against their work need to stop as young people have the right to know about past and present human rights violations in their communities,” said Ena Bavčić, Programme Officer at Civil Rights Defenders in Bosnia and Herzegovina.

The first in a series of attacks happened in December 2015, when a number of men broke into the premises of Kvart, stole promotional material, damaged the equipment and wrote insulting threats on the organisation’s office walls. One person was arrested in the aftermath, but charges are not accessible to the organisation under the explanation that the arrested boy is a minor. These attacks and the lack of proper response from the state are in violation of Articles 3 and 10 of the European Convention of Human Rights. These Articles ensure freedom from torture, freedom of expression and freedom of assembly and association.

Kvart members are part of the Initiative “Jer me se tiče” (Because I Care) which organises The White Armband Day. The event aims to draw attention to the persistent denial of crimes and discrimination of non-Serb victims by the local government in Prijedor. The symbolism of the white armband comes from the 31 May 1992, when the Bosnian Serb authorities in Prijedor (later in some other places) issued an order through the local radio demanding the non-Serb population to mark their houses with white flags or sheets, and to put a white armband on their sleeve when leaving the house.

This was the beginning of a campaign of extermination in which mass executions and rapes were carried out, concentration camps were established for non-Serbs and other crimes were committed in a systematic manner, resulting in the forced removal of 94% Bosnian Muslims and Bosnian Croats from the territory of the municipality of Prijedor. The fourth protest-march calling on the government of Prijedor to make a monument for the 102 children killed in Prijedor during the war was held on the 31 May 2016. The event gathers some 1000 supporters every year.