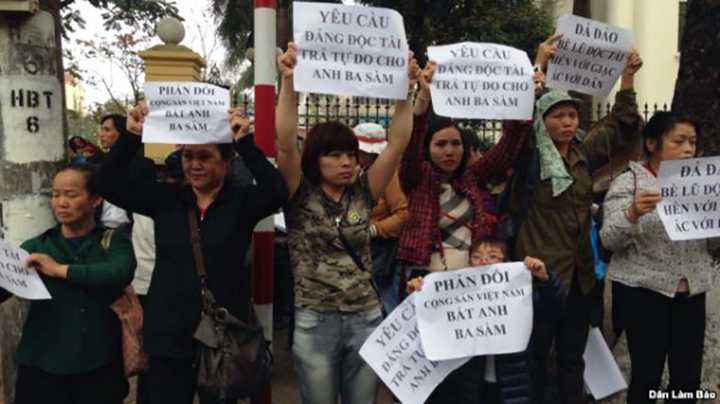 Dozens of supporters gathered outside the court. A handful was arrested, but released later in the day.
Photo: Dan Lam Bao.

Vietnamese authorities should release blogger Nguyễn Hữu Vinh and his assistant Nguyễn Thị Minh Thúy who were convicted on politically motivated charges, said Civil Rights Defenders after a court in Hanoi announced its decision on Wednesday.

Both were found guilty under Article 258 of the Penal Code for “abusing democratic freedoms to infringe upon the interests of the State (…)”. Nguyễn Hữu Vinh and Nguyễn Thị Minh Thúy have been in pre-trial detention since May 2014 for alleged anti-state postings.

Nguyễn Hữu Vinh, who is a former police officer and Communist Party member, set up a blog called Ba Sam in 2007, which together with other social media projects drew a huge readership. The blog’s postings mainly contained commentary and links to news on political, economic, social and cultural issues. According to local media, the prosecution said that the articles “present a one-sided and pessimistic view, causing anxiety and worry, and affecting the people’s confidence”.

Members of the European Burma Network (EBN) welcome the prospect of a continued Argentinian investigation into atrocity crimes against the Rohingya under the principle of universal jurisdiction. A rec...

Civil Rights Defenders and 73 media, press freedom, and human rights organisations write to Asian heads of state to call on their respective governments to release all jailed journalists amid the swee...