Hate Actions Against Roma Must Be Stopped 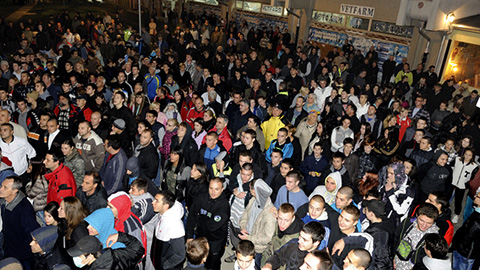 Civil Rights Defenders demand the police and Prosecutors office to immediately take all necessary actions against those who participated in the hateful protest against inhabitants in a Roma settlement in Zemun polje recently. The perpetrators should be prosecuted and convicted so that the victims of this horrible protest are served justice.

On the 3 November, a protest marsh gathered over 200 citizens in Zemun polje in Serbia. The protesters shouted offensive threats towards the Roma and openly showed their hatred against them. The mob chanted; “We don’t want Gypsies, we don’t want scabies”, “Scabby Gypsies, get out”, “Kill the Gypsies” and “Get out of Zemun polje”, as they walked toward a Roma settlement in the city.

“Serbia has to take firm steps to protect members of the Roma community and guarantee that they will not be subject to attacks nor hate speech in the media or in the public. We are especially concerned with the fact that the threats and insults were used by people living near the Roma settlement”, said Goran Miletic, Programme Director for the Western Balkans at Civil Rights Defenders.

Civil Rights Defenders are also deeply concerned about how the police handled another situation the same night, when a group of young men confronted a group of Roma and openly threatened them to life in the street. The police, present at the site, did not stop the young men while they in a very violent manner showed their hatred of the Roma.

This reveals that the discrimination towards Roma is not an isolated problem in Serbia. Even local authorities show that they don’t intend to respect Roma people’s rights. This was also made clear during a meeting between a representative from the local authorities in Zemun polje and Roma representatives, where the authorities, yet again, failed the Roma and continued the discrimination by accusing them for being the reason to a situation where children at a local school got infected by scabies. The representative told the Roma they should “stay in their homes” and “pay attention to their hygiene”.

“This is completely unacceptable and we expect the superiors to take appropriate measures and sanction this behaviour. Elected officials must work for the benefit of all citizens. Serbia is a member of the Council of Europe since 2003 and must secure the right to physical integrity to all of its citizens, regardless of their nationality. This also means securing everyone from threats of physical violence. Also important is that the media do their job according to professional and ethical standards. Freedom of information goes hand in hand with responsibility” said Goran Miletic, Programme Director for the Western Balkans at Civil Rights Defenders.

The Roma people is one of the most discriminated and vulnerable groups in Serbia. There are over 400 000 Roma people living in Serbia and nearly half of them live in about 600 informal settlements across the country, without any ID or decent living conditions.

“We are family” – Tirana is ready for its 11th Pride Parade

On 17-18 November Civil Rights Defenders will be organising the 2021 Western Balkans Roma Summit in Pristina, Kosovo. The event will be live streamed via the KUDO platform, with translations available...

On 26-28 October, Civil Rights Defenders will be organising the third Regional Journalists’ Days. The event will be held in an online format and participants are encouraged to register here. Sin...