By exposing violations of human rights and other difficult topics, Svetlana Lukic and her co-workers at Pescanik’s web site attract 200.000 visitors per month. Her uncompromising way to handle sensitive and, in the view of many, controversial issues makes her a target of attacks by extremist groups. 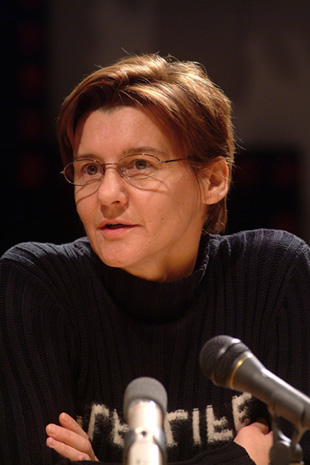 During the Balkan wars in the 1990s the Serbian journalist Svetlana Lukic was suspended twice from her post at Radio Belgrade because of the way she chose to report. She covered the events from the city of Vukovar, Croatia, which was besieged by Serbian army. Simultaneously, Svetlana’s cousins participated as soldiers on the Serbian side. The second assignment that rendered her suspension was to report from the bomb-shelled Sarajevo.

”My editor said that I had not done my assignment; I had not made a report on sufferings of Serbs in these cities. The suspensions helped me realize that the majority of my colleagues had become silenced. They had decided to keep quiet about everything, including the most severe crimes. I also realized that Slobodan Milosevic’s regime had entered a new stage of dictatorship in Serbia. It was just a matter of time until I would be dismissed”, Svetlana says.

Even after the fall of Milosevic’s regime in year 2000, the pressure continued. Today most media outlets in Serbia are heavily controlled by political and business elites. One exception is the radio program Pescanik (in English: The Hourglass), which in 2011 had 475.00 listeners and today has around 200.000 visitors a day on its web site.

Pescanik is a public forum for debate on difficult topics, helping  people make decisions about matters that concern their lives. Pescanik is a platform for activists and experts where they can speak about themes they regard as focal for Serbian society.

Pescanik is the only media platform in Serbia today that offers their listeners critical in-depth analyses and that engages with the community of reform-oriented. The program plays a unique and important role in spreading knowledge about human rights, initiating public debate and mobilising for change.

Several media houses, among them the national Public Broadcasting Service, have described Pescanik as ‘anti-Serbian’ or ‘treacherous’; an opinion also shared by right wing and fascist groups.

Svetlana recalls a tour that Pescanik took in the countryside, visiting more than 70 towns, in order to initiate debates outside the capital; practically every public event had to be monitored and protected by the police. On three occasions events were cancelled because the local authorities could not guarantee the safety. But incidents occur in Belgrade as well:

“On occasion my phone is tapped. Someone spits in my face or hits me in the street or in the local bakery. Or throws an insult at me”, she says.

While Pescanik was aired on the then independent radio station B92 the signal was constantly jammed, but only during Pescanik’s airtime. A number of times their website was blocked for several days in a row. Also, Svetlana’s car was demolished once while she was on air.

All these events were reported to the Police. The Serbian President informed the public that these cases would be investigated, but the Pescanik-team has still not been informed of any details regarding the investigations.

On rare occasions Svetlana feels afraid. This happens when “chauvinists and nationalists arise and have a need and a non-spoken permission to do whatever they feel like”, she explains and recalls the time when Kosovo declared independence, when a Pride Parade was going to be held in Belgrade, and during a pre-election campaign when party leaders competed about being “the greatest Serb.”

“Whenever I feel afraid for my safety, I am ashamed because I remember all those people I saw during the wars in the 90s who suffered and had real reasons to be afraid. Some of them are not alive any more.”

Svetlana gathers strength to continue her work from what she has witnessed:

“It was my decision to be a journalist. I cannot escape that. I am compelled by what I have seen, what I have taped, by people whose destinies I have come to know, and by a firm conviction that in the following years my country is going to face a new catastrophe unless something is urgently changed.”

Like the majority of people in her generation, Svetlana never got to learn anything about human rights in school. It was considered a ’western fabrication’. But when she found herself in the middle of war, she realised what it means to have the ‘wrong’ faith, surname or skin colour. After the war she saw continued violations of human rights:

“So called ‘democratic authorities’ systematically discriminate Roma and representatives of smaller religious communities, self-proclaimed pro-European politicians disregard the dramatic increase in death of women as a result of family violence”, she exemplifies. 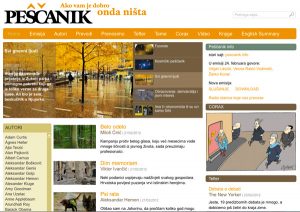 For Svetlana there is no other option than to continue her work, the way she does it. Since she has a tool as powerful as media in her hands, she believes that she can contribute to increased knowledge and that she has an obligation to do that.

“During my life, I have met and known many victims. Their faces and stories make me committed to this job, they oblige me never to stop talking about it.”

When asked about the most urgent changes for Serbia, Svetlana’s answer stretches from peaceful pride parades in Belgrade to an independent judiciary system. Now and then Svetlana’s hope fails her:

“At times I feel like a hostage of my country, of my listeners and my readers. I dream about leaving the county forever. Often I get the idea that nothing I do is actually beneficial or useful to my co-citizens, or my people. But then a new day breaks. New information arrives, confirming the situation to be much worse than you thought, affirming that our problems are so basic that any free-thinking person, unfortunately, can not do much wrong.”

Born in Belgrade, Serbia, on 14 December 1958. Svetlana Lukic holds a Bachelor of Arts in Political Science (Department of Journalism). As a student she was a professional sportsman.

From 1987 to 1993 Svetlana worked as a journalist for Radio Belgrade, as editor and presenter of the political radio show Niko kao ja (Nobody like me).

In 1993 she was dismissed from Radio Belgrade and the same year she joined Radio-brod (EU project) where she, together with journalists from former Yugoslavia, reported on military operations on the territory of former Yugoslavia.

Svetlana started to work for radio B92 in 1994 as editor and author of “Fantom slobode” (Phantom of freedom) and Pescanik (the Hourglass) shows. Pescanik was registered as an independent production in 2006.

Svetlana has been presented with several awards, both in Serbia and abroad, due to her journalistic deed and human rights work. Among these, an award by the Serbian Journalists Association in 1990 for her work with Niko kao ja. In 2006 the authors of Pescanik received the “Press Freedom Award – Signal for Europe”, awarded by Reporters without Borders Austria.

Ten years after the fall of Slobodan Milosevic’s regime, Serbia is still dealing with the political, economic and cultural burden inherited from the conflicts that lasted for more than 10 years in the 1990-s. The country is deeply affected by issues like dealing with the past, the inability to secure continuity in the reform processes, a deep division between pro-European and right wing blocks and a lack of awareness on basic human rights and accountability of duty holders.

Governments are ultimately responsible for human rights and democratic reforms. In transitional societies, however, like Serbia, the civil society is the driving force for the observance of human rights. They play a key role by continually monitoring the machinery of power, providing independent information and space for debate, as well as working to ensure that the state and its representatives take responsibility when mistakes are made.

Violence against journalists occured both during Milosevic’s reign and afterwards. Svetlana Lukic even recalls two or three journalists being murdered.

The majority of media outlets in Serbia are heavily controlled by political and business elites. There is a tendency to support policies of the current government uncritically, and to avoid coverage of issues that could politically damage the current holders of political power.

“Actually, the scariest thing is to learn that the authorities did not have to recline to any drastic measures since the vast majority of reporters succumbed at the slightest glimpse of political and financial pressure.”

Other: In 2006 the union with Montenegro was dissolved and Serbia became an independent state. Kosovo declared independence from Serbia in February 2008. So far 89 countries have recognised Kosovo but the Serbian parliament has not.

Belgrade Pride on September 18, Prelude to EuroPride in 2022

Belgrade Pride will be held on Saturday 18th September in the Serbian capital, which will serve as a prelude for organisers preparing to host Europe’s biggest Pride event next year. The slogan f...

In anticipation of today’s (26 June) second Skopje Pride, Civil Rights Defenders has conducted a public opinion poll, showing that the majority of North Macedonia’s citizens support the right of...